The Apple Watch Series 3 reminded me why I…

If you ask me, the way that the Apple Watch brought the idea of wearable technology into the mainstream is something only Apple could have done.

When it was put on sale in April 2015, it seemed to take on a sort of mythical status. Many people I talked to seemed to know only of its existence. The entire concept of strapping a computer to one’s wrist was so “out there” that not many people really cared about it.

I bought my first smartwatch, a Pebble Time, a few months after the release of Apple’s first smartwatch began, and nearly every person who asked about my watch asked if it was the new one from Apple.

But here we are, three generations later and hardly a day goes by that I don’t see an Apple Watch strapped to someone’s wrist walking around campus or standing on public transit.

I can’t even begin to fathom how this spike in popularity happened, but I suspect that a shift in marketing that positioned the device as a fitness tracker first and smartwatch second, instead of the other way around, helped.

As I will readily admit, however, I’m not particularly focused on the fitness aspect; plenty has been written on the Apple Watch Series III’s abilities as a fitness tracker, by individuals much more knowledgeable in that area than I am.

This piece, instead, will come from a perspective of someone who puts a heavier emphasis on the smartwatch part of the equation: the ability to stay plugged in to my digital life without having to remove my phone from my pocket. After all, part of the reason I bought one in the first place was to recapture that feeling of effortless connectivity that came with my first smartwatch.

How does it look?

To be fair, the Apple Watch still makes it pretty obvious that I’m wearing a piece of high technology on my wrist. However, I think that Apple has done a lot with the both the industrial design and the software that makes their watch much more elegant than most other smartwatches on the market right now.

For one, the screen is simply fantastic in how it creates an illusion of minimal bezel. The glass covering the display curves around the side to meet the aluminum body instead of terminating abruptly at the top edge.

The OLED screen works with a great “dark theme” where only the pixels you absolutely need light up, creating a look where it seems like the UI elements are just floating in the middle of this black, curved pane of glass. On the home screen, app icons near the edge of the screen continuously get smaller until they fade from view, instead of just being cut off. 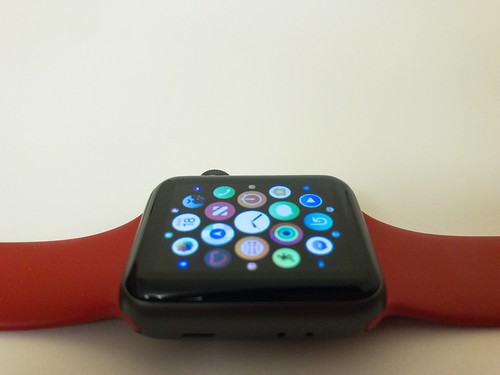 It’s those little touches that really make the watch feel more polished as a whole, and nicer to look at on a day to day basis.

As a smartwatch, does it do its job?

Like I said, my objective in buying the new Apple watch has really been to minimize the number of times I pull my phone out of my pocket or pick it up to look at it during the day. Feel free to call that abject laziness.

Having said that, it’s no secret that the Apple Watch plays the part brilliantly. In part because of Apple’s deathgrip on software, simple actions like replying to a message just…work, not to mention the inclusion of a nifty text input method that has me drawing little characters on the screen.

It’s the myriad of information I can access on my wrist, however, where the watch really comes into its own. I can take a look at my bank account, get directions to my next meeting, call up a password from LastPass, or check the next Metro departure all while my phone sits in my pocket.

Of course, it’s not all sunshine and rainbows. Some apps do take more than a few second to load, and the odd reliability issue still pops up- It was about two weeks before I could get the Messenger app to actually load content.

My biggest complaint, however, is that while the Apple Watch works really well at giving you information, I still feel limited when I want to perform more complex actions.

For instance, Siri on Apple Watch can talk back to me now, but it still can’t give me a translation, identify a song or navigate me to my parked car- all things that I’d have to take out my phone for. Also, if I wanted to quickly add an appointment to my calendar, I’d be out of luck.

There’s also the concern of major app makers such as Google, Twitter, Instagram and Slack pulling their watch apps and what that means for the broader ecosystem, but I’m more inclined to agree with the argument that being able to reply to incoming notifications takes priority over being able to see an archive of past messages or posts. After all, the goal of wearables was never to encourage prolonged swiping on your wrist, it was always more about the quick, run-and-gun actions to save you a bit of time pulling out your phone.

But how about as a watch?

Part of the reason I loved by Pebble Time was that it largely eschewed many of the flashy features found on its peers and instead focused on being a really good watch first. It had an e-ink screen instead of an OLED and buttons instead of touchscreen navigation, but it was able to maintain an always-on screen AND four days between charges.

Obviously, that isn’t the case with the Apple Watch. There are plenty of reviews out there that say so. This screen only turns on when I raise my wrist in a very specific way, and I’m ending up charging my watch either everyday or every other day.

Do I miss being able to quickly glance down at my wrist to discreetly check time or notifications? Absolutely. Do I miss not having to worry whether a 20% battery will last me the rest of the day? Sure. Do I think the vastly expanded functionality is a worthy trade off? I don’t know yet; maybe I’ll revisit this in a few months, though.

For fear of sounding too nostalgic, I’ll just summarize in one word how it felt when I first got my smartwatch: magical. Especially when I replaced my aging iPhone 4S with an Android device, I was in love with being able to do so much on this tiny slab of glass and silicon strapped around my wrist.

In its own way, I think the Apple Watch comes pretty close to bringing back that magical feeling. 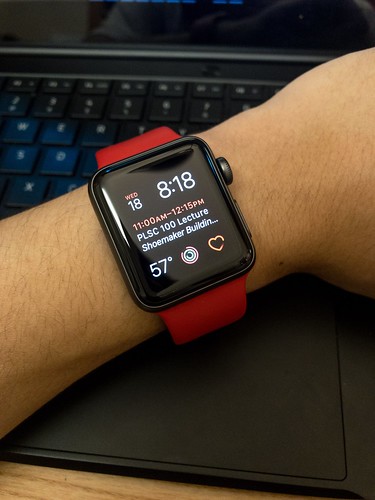 About the camera gadgets video

Alexa isn’t perfect on the…

The hybrid smartwatch is not…

This site uses Akismet to reduce spam. Learn how your comment data is processed.